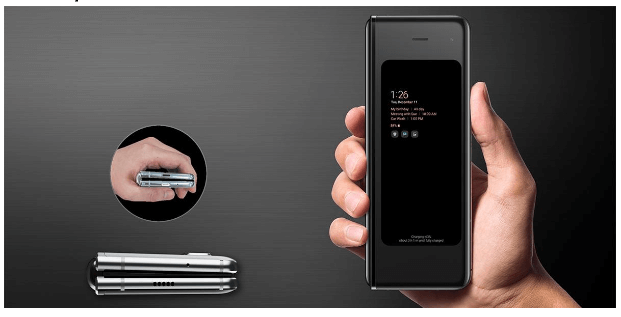 With its ambition, perseverance and cutting-edge know-how, Samsung has overcome the challenges of ‘folding screen’ technology and has given the world the most advanced technological device of the day, the Galaxy Fold.

What makes the device stand out is that it has two monitors, a large folding screen internally called the 7.3-inch Infinity Flex and 1536 x 2152 pixels resolution (420ppi) and a smaller Super AMOLED exterior with diagonal 4, 6 inches resolution 840 x 1960 pixels (420ppi).

The second and smaller ones are used to fully operate the device without the need for the larger screen to unfold. The “star” of the device, however, and the one that makes the difference is the larger and foldable Foldable Dynamic AMOLED technology display, as it once unfolds offers the user the ability to hold a small tablet in his hand and work with up to three applications at once (3-way multitasking) for increased productivity, convenience and time saving.

Read more:  The Most Anticipated Camera Smartphones to Keep an Eye On

Google’s “app continuity” feature in the Android version running the device also allows the user to easily switch between the two screens when an application is open (for example, it can receive a Facebook message to see on the small screen but respond immediately by opening the larger screen to use the larger keyboard).

Inside the only Samsung device that comes to upgrade the role of the smartphone is the Qualcomm Snapdragon 855 processor combined with 12GB of RAM and 512GB of storage. Of course it’s equipment couldn’t be top notch and so it offers WiFi 802.11ac, dual-band, GPS with A-GPS support, Glonass, Galileo and BDS, NFC, USB-C (USB3.1), stereo speakers with Dolby Atmos support powered by AKG, fingerprint sensor, face scanning capability, and Samsung DeX support for connecting to a monitor and converting it to a desktop computer.

Read more:  5 Wireless Accessories to buy for your Phone

Its battery has a capacity of 4380mAh. 15W fast charging, wireless charging, and reverse charging are also supported so that you can use your mobile as a “powerbank” to charge your wireless headphones, for example.

The Galaxy Fold has a total of six cameras on the “three sides” of the device, one on the front when it is closed for selfies photos, three on the back also when it is closed, and two more when it is on “tablet” mode . At the rear the triple layout consists of a 16-megapixel ultra-wide-angle camera with f: /2.2 lens and 123-degree FoV (123-degree field of view), a 12 Megapixels optical image stabilization telephoto camera (f: /2.4) and a 12 Megapixels dual-pixel wide-angle camera with optical image stabilization and variable aperture with options f: /1.5 and f: /2.4.

When the Galaxy Fold is unfolded or open there is a dual camera layout, consisting of a 10 Megapixels wide-angle camera (aperture f: /2.2) and an 8.0 Megapixels RGB depth sensing camera with f: /1.9 ( is essentially a depth sensor). Finally, there is the front camera at 10 Megapixels with f: /2.2 aperture lens system. The all-new and unique Galaxy Fold feature is available in four colors in Cosmo Black, Space Silver, Martian Green and Astro Blue.

6 Essentials of a Well-Conceived Marketing eBook

What is Blogger and how to create a blog with this tool?

Foldable Smartphones Are The New Trend in 2020