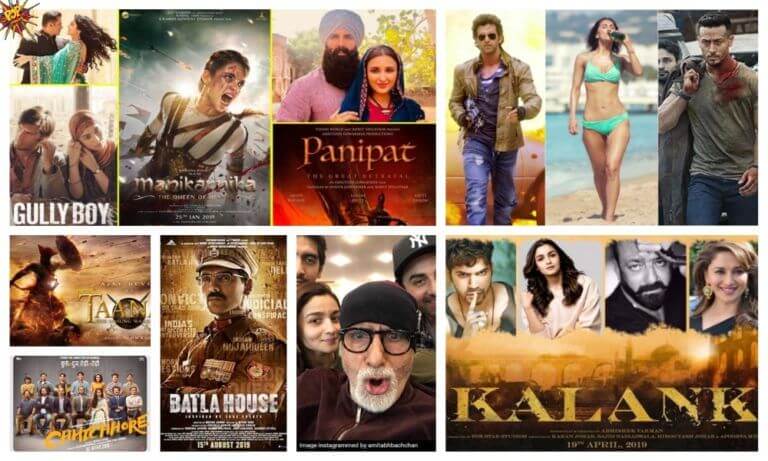 These days, people are crazy about the movies. For this, Indian cinema is best and which is the largest film producer industry in the world. There are various types of cinema in India – thePollywoodcinema (Punjab), Telegu cinema, etc. but the best is in Bollywood. These movies help to relax and entertain their audience. The era of going to theatres is declining due to the internet. With the help of the internet, you can download the various movies according to your taste and preferences. The best app to download movies can be Vidmate. The 2019 year isn’t over but we have some best Bollywood movies till now to watch. Here is the list-

It is a Romantic film which is directed by Sandeep Vanga. The movie is a remake of film Arjun Reddy which is a Telugu film. The lead actor is Shahid Kapoor and Kiara Advani. The movie or story revolves around Kabir Singh who is analcoholic surgeon ruins his life to marry his girlfriend but the girlfriend is forced to marry someone else.

It is an Indian Hindi action war film which is written and directed by Anurag Singh. The lead actor is Akshay Kumar and the lead actress is Parineeti Chopra. The story revolves around the battle of Saragarhi. Almost 21 soldiers have sacrificed their lives against the 10,000 Afridi and Orakzai Pashtun tribesman in 1897.

The movie is based on the biography of Anand Kumar and is directed by VikasBahl. The story revolves around how he selects and teaches the students and students work hard without having the basic requirements- food, sleep, etc. The HrithikRoshan has played the role of Anand Kumar. The movie is very motivating and inspiring for the students to achieve their dreams.

Read More:  What is Blogger and how to create a blog with this tool?

It is an Indian military action film which is written and directed by Aditya Dhar. The lead actors are Vicky Kaushal, PareshRawal, MohitRaina, and Yami Gautam.  The film is based on the real-life story i.e. Uri attack 2016 and the revenge was taken by the Indian army. The movie also shows the bravery of the Indian soldiers and had shown that it is the start of the new India.

The movie badla is an Indian crime mystery thriller film which is directed by Sujoy Ghosh. The lead actors are Amitabh Bachchan , Taapsee Pannu and Amrita Singh. The story deals around an interview between the lawyer and businesswomen. The women have been found guilty of murdering her lover. The movie is a suspense and fantasy.

The movies are important and sometimes they are so influencing that you are inspired to do the same things as they have done to build the economy. Sometimes the movies are made for inspiring or entertaining to show the real-life of the economy. The internet is growing these days and allowed us to watch everything online. So, to download the videos, I would recommend use of Vidmate which is of a low size and can be downloaded in less time than the others.

How to Make Money on Instagram With & Without Followers