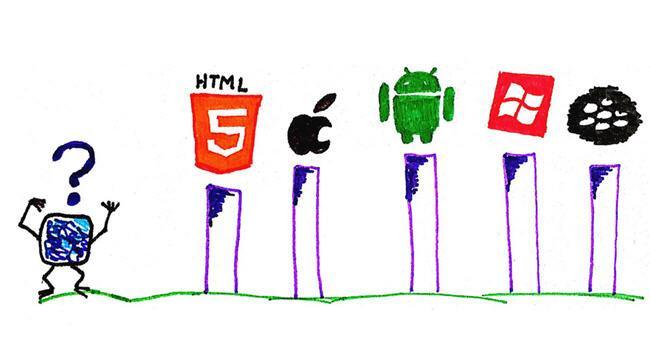 Quick answer, you will say. Android because of its market presence, and iOS because that’s where the money really seems to be. That would be a good summary of the trends in mobile application development in recent months – and years – but behind it there is much more interesting data .

And that is precisely what we have tried to analyze in a two-part article to analyze the mobile application development market. In this first part we have consulted the latest studies , while in the second we have published the interviews we have carried out with mobile developers in our country. Attentive, let’s start.

The VisionMobile company has been producing its Developer Economics report for a long time , and in the sixth edition , which studies the first quarter of 2014, it analyzes market trends in terms of developers’ interest in the mobility segment.

The basis of the study is solid: both Intel and Mozilla are the main sponsors – there are many more on the list – and it involves more than 7,000 developers from 127 different countries . A good representation for an estimated 2.3 million developers in 2013, and for an economy that generated $ 68 billion in 2013 and is estimated to enter $ 143 billion in 2016.

The state of mobile app development seems pretty clear: Android and iOS accounted for 94% of smartphone software sales in the fourth quarter of 2013 according to that study. Of that percentage, 71% were dedicated to Android, while 55% developed on iOS. As can be seen, part of the developers works in parallel on both mobile platforms.

But things get even more interesting when we start talking about the other great shadow platform: HTML5 . This open standard that is the basis of proposals such as Firefox OS – and to a lesser extent, Tizen, Sailfish OS or Ubuntu – has yet to convince the 69% of the developer community that continue to consider both iOS and Android as their platform preferably.

And yet these kinds of solutions seem to continue to advance slowly but inexorably. 52% of developers claim to have it as an alternative development platform and contemplated in their projects, but it is not by far the priority for them.

A recent Sencha survey indicated that more than 60% of mobile developers have migrated to HTML5, and it is expected that 75% of them, in turn, will bet even more on this standard in 2014, although the truth is that by the At the moment that commitment is more testimonial than anything else, and platforms like BlackBerry are more interesting for some developers than HTML5.

Things change, however, when we talk about emerging markets, which are exactly those that Firefox OS is aimed at. The study reveals that in Asia, South America, the Middle East and Africa, iOS is actually third in priority behind Android and HTML5 .

In Asia, for example, Android reigns with 46% of the developer market, compared to 28% for iOS. In Africa the difference is abysmal: 47% for Android, 9% for iOS. In South America, HTML5 attracts 64% of developers according to the Developer Economics Q1 2014 index, almost as high as that of Android (71%) and significantly above iOS (49%).

It should be noted, however, that the use of HTML5 is very disparate, and developers not only contemplate it for native applications, but also as part of hybrid applications (which also have native code, but display web content thanks to HTML5) and even as an alternative to, for example, show the documentation of an application. Thus, while 37% of mobile developers use HTML5 as a platform – to develop mobile websites or web applications – 15% try to go beyond the browser and use this standard as a fundamental pillar of applications quality mobiles.

The conclusions of the study are conclusive regarding the current situation of HTML5: although it is a tremendously attractive platform, there are still important problems to solve for the future:

In short, about 70% of developers use HTML5 in one form or another, but that only shows the strength of the technology, and not that of the mobile web as a platform. HTML5 is still far from becoming an app ecosystem as it lacks distribution and monetization services in the form of a large-scale app store. In addition to that, the problems that have been occurring in HTML5 mobile applications for the browser continue to exist, such as the performance deficit with respect to the native code, the lack of access to specific hardware resources through the API, the lack of mature tools and also a certain level of fragmentation in various browsing environments. […] Despite these problems,

But despite the appearance of alternative platforms, the reality – contrasted with other studies, such as the GDC – is that today Android and iOS set the standard , and according to the study, they will continue to do so for at least the next three years. Things could go even further if, as it seems, Android extends its reach and manages to conquer the still confusing Internet of Things, as well as wearable devices , in addition to the automotive industry, or fields such as entertainment and education.

4 Power Supply Design Essentials For Your Next Circuit Board Build